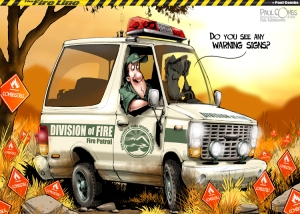 Wildfire season is already in full swing for many regions, and things look to get much, much worse before the end of this summer. Here’s a light-hearted Fire Line look at things to come. Enjoy, and stay safe out there!

To all our active, wounded, and retired warriors – and for all who made the supreme sacrifice… THANK YOU!!

Had some fun with one of last year’s sketchbook pieces. I was getting bored with a project last week and just started fooling around, then couldn’t stop – a few hours later my smoking construction worker from Baltimore had life. I really like the loose style painted from the smaller original drawing. I tend to get too detailed and over work a piece when the original drawing is large. Hmmmm, maybe I’ve just learned a lesson!!! :)

Long live the power of an editorial cartoon!!

While signing books on Monday during FDIC, a large (pushing 375 lbs) firefighter approached me with his slightly slimmer, but still girthy entourage of three. I extend my hand in greeting, which was met with a chest puffing and the comment “I don’t like the way you make fun of big people!” Being taken off my guard by his comment, I respectfully asked if he is a front line firefighter. He answered with a snarky “I’m a kick-ass go-gitter!” I then asked how long he could last on one 30 min SCBA bottle – he responds “30 minutes!” Annoyed by his demeanor and eager for a spirited fight, I tell him that he’s lying to me. I continue that he is not only a risk for heart attack or stroke, but that he is putting his entire crew at risk because they may be called to rescue him from a hostile environment. He flips me a ‘fan gesture’ and says he knew I’d be a “d***”. Ah, my fans!

I’m telling you this story because it opened my eyes to a problem that we don’t hear much about in the fire service – obesity as an epidemic. I spent the remainder of my week at FDIC watching people and taking mental notes of how many ‘front-line’ firefighters would be considered obese – and the percentage was alarming (pushing 40%). What’s more, that percentage became higher as the week progressed. Many variables play into this, of course, and Lord knows most of us have pounds that we could shed, but this is a topic that needs to be discussed.

Heart disease, stroke, hypertension, diabetes, certain types of cancer, arthritis, sleep apnea, stress, lack of agility, back injuries… the list of injury and devastating health problems due to obesity is long! Isn’t this job hazardous enough without us adding to the problem with actions we can change? If you fall into this category, get up, get out, and start getting in shape! Begin a fitness and nutrition program, and stick with it – your body, mind, and soul will thank you! 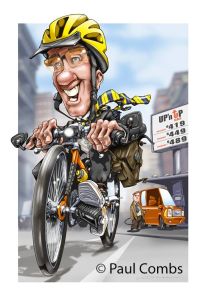 Here’s a spot illustration I created for Inside Business magazine recently. I love assignments where I get to render movement and energy – I’m happy with how this turned out.