Spring and Summer bring an onslaught of action packed movies sporting muscle-bound studs and mercenary vixens who leap and punch their way into the American culture with gravity defying ease. I admit, I’m guilty of enjoying the latest exploits and theatrics of Captain America, too. But what happens when society places more emphasis on pop culture icons and celebrities (and their sometimes ridiculous and ill-informed political/social stands) than on America’s real heroes? Heroes that defend, protect, rescue, heal, and teach?

I draw this cartoon in the wake of finally taking time out of the studio to watch Captain America: Civil War – a very entertaining movie (if not for the rude people in the theater – but that’s a different commentary) with non-stop action and a plausible story-line. While driving to the theater I heard no less than 15 Memorial Day sale commercials on the radio, saw countless roadside signs declaring 20% off various items, and one audacious billboard that boasted the reason for the holiday was to save big on your next new or used car. The straw (or t-shirt) that broke my metaphorical back was a shirt a kid wore to the movie declaring  Captain America the true American hero! Really?! A fictional soldier fighting fictional battles, who can never die, regardless of how many bullets are fired at him, is what our nation considers a real American hero? Is this what we’ve come to?

So, I post this commentary on this most hallowed weekend of remembrance to encourage you, and others who may see this, to put the sacrifices of our nation’s true heroes in perspective. To remember that freedom isn’t free, and to take a moment to cherish our freedom and safety, and those who made it possible.

True American heroes wear many different uniforms, but none wear a cape or carry a Vibranium shield! Remember what so many gave, so that we can celebrate and share what we have. 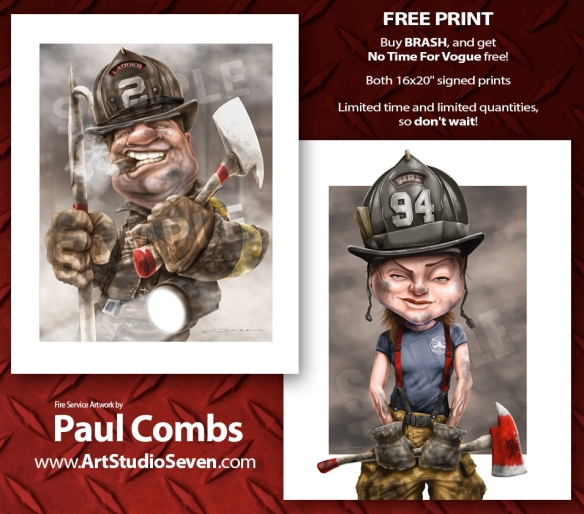 GET A FREE PRINT

How cool will it look to have these two hanging out together on your wall? Buy my pugnacious fireman Brash and get the sassy and confident No Time For Vogue FREE!

Both are 16×20″ prints signed by me. $65 dollar value, but don’t wait, there are limited quantities and I am only offering this deal for a short time.

Perhaps it’s time for Smokey to get back to his carnivorous roots… nature’s knucklehead herd thinning in action.

(Note: Yes, I know grizzly bears are omnivores, but in the context of this cartoon, work with me. As stated by a fan yesterday, it just means Smokey can eat the idiots and have a side salad, too.) 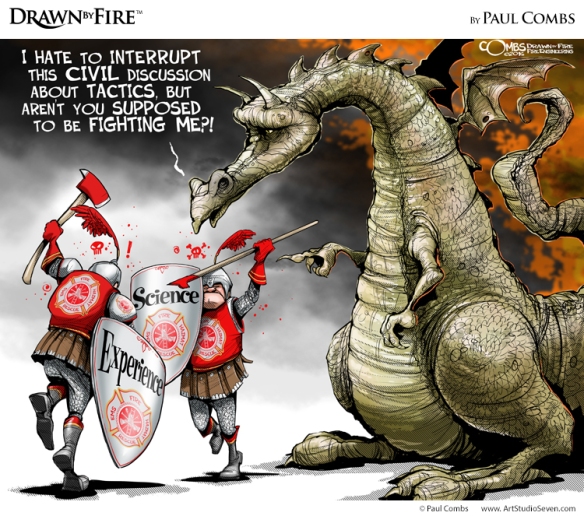 Firefighters are a spirited bunch, but social media has proven that we can be divisive, polarizing, and bombastic, too. It’s human to have differing opinions, and that’s what makes us a great culture and spurs change, but nothing gets accomplished by short-sighted opinions, contentious comments, and name-calling – we are better than this, my brothers and sisters.

STAY FIRED UP, but do it respectfully!