To see more Drawn By Fire or to purchase prints and posters, go to:
http://artstudioseven.com/page-fire-ems-prints2.htm

STAY FIRED UP, brothers and sisters, and be unique. Be original. Be you… but keep an ample supply of kitty litter:) 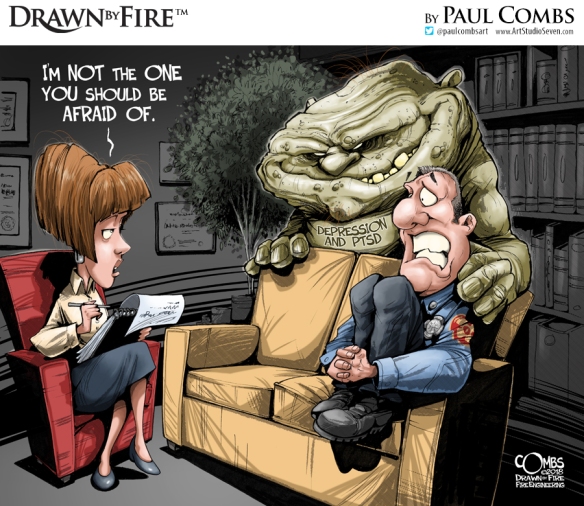 From the time we are children, we are told to be afraid of monsters. Monsters under the bed. Monsters in the closet. The monster in that dark and treacherous basement that our parents never wanted us to explore alone. As we grew older, our teenage monsters changed to be the bully in second-period literature or our ever-present self-doubting reflection in the mirror. Adults? Yeah, we have our monsters, too, but the faces have morphed into opposing politicians, rogue foreign leaders, pedophiles, and the new reality of school shooters who kill indiscriminately and without remorse. Monsters are everywhere.

First Responders are not without their own monsters, who, in addition to the monsters of every day society, multiply silently in the dark corners and cellars of our minds. They are ghouls of our own creation and can grow in their ferocity if neglected … or, worse, fed a constant diet of fear and regret. And just like the cartoon I published alongside an amazing article by Chief Jim Crawford (January 2018 FireRescue Magazine), we all have ghosts to deal with. But what happens when those ghosts become ravenous monsters? When they stalk our conscious and unconscious psyche halls and attics, devouring our sanity and ability to function as “normal” human beings? We ask for professional help, or at least we should. But, unfortunately, we consider such help as the enemy at times and treat their presence as another monster, yet far more sinister than our imaginary creatures.

If you follow my work, you know that I am an advocate of mental health awareness, prevention, and intervention. I champion the psychologists and social workers who help the helpless and begin to repair the mental damage that this calling can tear apart. It has been a mission of mine since my lieutenant committed suicide in 2008, and I have been relentless in my support–that is, as long as it was someone else!

So, here, on this social platform for all to see, I have a confession: I am NOT Superman. Not hard to believe? Well, it was a shock to me! In January 2017, I lost one of my best friends, EJ Mascaro, to a tragic off-duty car accident. EJ and I had become increasingly close over the past three years, and he was only one of a few people whom I’ve let in to my inner circle–a very select and rare club. EJ was a sounding board for much of my work and would comment on every cartoon that I published. Every cartoon! We would laugh about them, argue their validity, or simply talk about the topic and try to solve the world’s problems. However, EJ’s death began to grow as a monster within my creative mind, in my day to day life, and in the studio. I began falling behind on assignments or simply not wanting to draw them at all. Why? Because the pain of not getting that call/text/message from EJ was just too much!

This monster began to grow. It began to fester!

The tipping point for me came one Saturday morning this past summer when I had spent another restless night on our living room couch and another night calling out incoherently in my sleep from another nightmare. I didn’t want to face the reality of what those nightmares represented, because I NEVER have nightmares! My dreams are Indiana Jones parodies, at best–giant rolling boulders and flying poison darts where I heroically escape and save the day. Nightmares are rare! So, my epiphany came in the way of my wife calling me out as a hypocrite. To put away my imaginary invincible cape and reach out for help–before my monster’s appetite grew too big.

I will not bore you with the details of those dreams, only to say EJ was part of each and my unconscious mind was trying to work out the solutions because I wasn’t doing it in my waking hours. It wasn’t easy to get professional help, because I saw my therapist as a bigger monster than the one roaming my inner halls–ridiculous, but all too real.

Sarah Gura and I spoke over the phone. She not-so-gently pushed me to go places that I did not want to visit. I talked. She listened. I became angry. I cried. I realized that I knew the answers but would not allow myself to listen. She helped me connect the dots and reduce my monster to no more than an annoying bump in the night. Eventually, I accepted EJ’s death and began to move forward–not forgetting or minimizing our friendship but letting life happen and allowing myself to move in its current.

I came through this ordeal stronger and more ready than ever to create work that may help others. I do not admit weakness easily, but sometimes you must fall hard to learn how to pick yourself up again … stronger …  faster …  better.

It has been a tough year without my brother, but a year has passed with life events that he would not have wanted me to miss because of him. And because I was finally willing to face my perceived Therapist Monster, I was able to quiet the real one to a whimper.

Know your monster, the real monster, and get help before that monster becomes a beast too big to handle. It’s never too late, but the job is much easier when the monster is small.

STAY FIRED UP, and never allow your monsters to dictate your life! 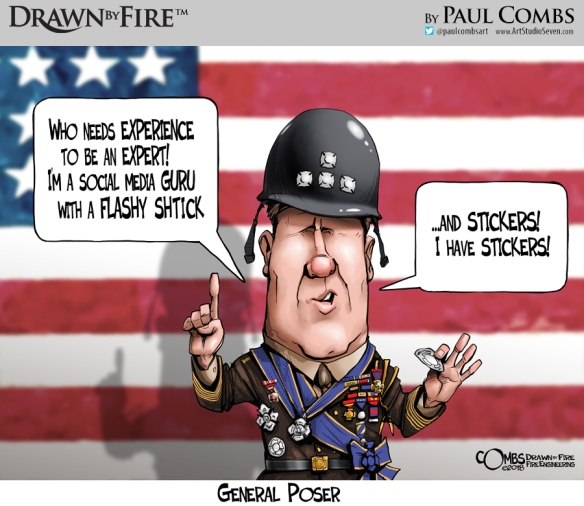 My guess is this cartoon will generate a few Fan Mail submissions. There’s nothing wrong with marketing your skills, but that marketing must have gravity and credibility. 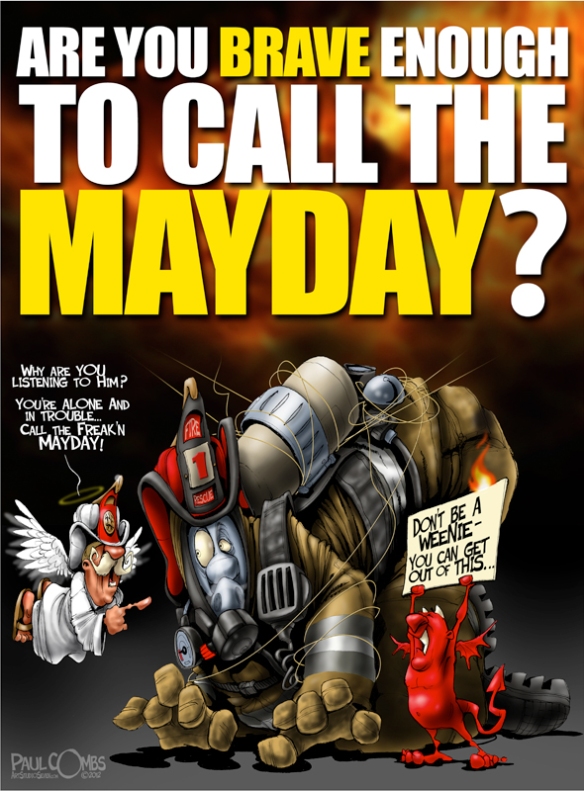 To see more Drawn By Fire or to purchase this poster, go to:
http://artstudioseven.com/page-fire-ems-prints2.htm 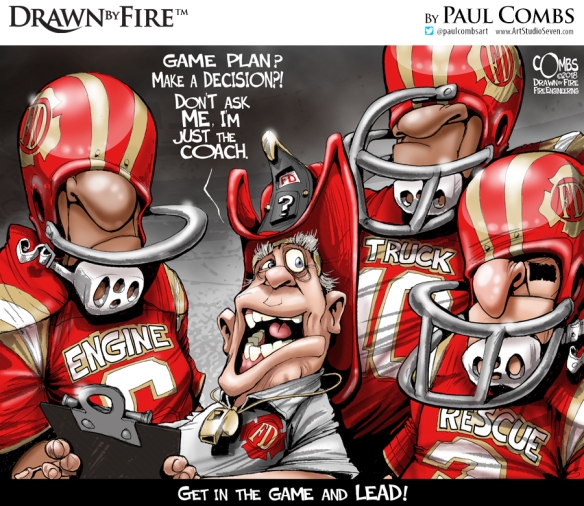 The Super Bowl – the pinnacle of professional football greatness, myth and lore, where there have been some amazing athletes who can claim to be the glorious victors, or the devastated runner-up. However, one thing is for certain, whether you are the winner or loser of the BIG game – they all got there by being 100% dedicated to their craft and lead by passionate leaders! This year’s match-up puts one legendary leader known for his no-nonsense emotionless approach to perfection against an up-and-coming coach who is not afraid to show his emotions and is approachable to his players, but just as driven to success. These two coaches, and their coaching staffs, are dramatically different in their approach to leadership, but they do have one very predominant comparison – they lead! They make decisions. They act when actions are needed and allow their highly trained athletes to do their jobs. They are IN the game!

All too often in today’s fire service we find people in leadership positions who by fault of their lackluster personalities, their fear of retribution, selfish agendas, or simple apathy and unpreparedness will not lead or make meaningful decisions. They talk a good game, but when game time comes, they fall short of expectations. Sometimes this is not as much the fault of the person, but the organization who promotes inadequate people to operate important positions creating a history of failure and shortsighted goals (I’m a Lions and Browns fan – I get it!).

My question to you is, which coach will you be? Will you lead and make the tough decisions, or hide behind falsehoods and excuses. Will you point the way, or point fingers at everyone but yourself? Will you commit to excellence, or be satisfied with mediocrity?

STAY FIRED UP, and if you’re in the game, be IN the game, and lead!