Hang in there, Spring is just around the corner!

The firehouse and training grounds are very fun place to be. Lighthearted jokes and razzing are the norm – and quite honestly a very healthy behavior. Good-natured poking and prodding creates friendships, camaraderie, trust, and some of the best nicknames in the fire service. However, when good-natured fun turns to hazing, you need to step in and stop the practice immediately. NOTHING good comes from the unnecessary abuse and ridicule that has ruined many fire service careers – for both the offender and offended! If someone needs to humiliate and demean others to make themselves feel strong and empowered, then they’re in the wrong profession! But worse are those who stand by and watch, or laugh, knowing it’s wrong. Have the courage to stop this as it’s happening! 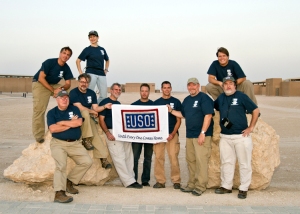 Monday, October 17, Dulles Int. Airport, D.C.:  Here is my first personal sketch from our USO tour last month. Saw this gentleman on the first leg of the trip at Dulles Int Airport in the United Airlines lounge – obviously a worldly traveler:) I swear I could hear a Sinatra soundtrack has he walked by – he was quite the “player”, I’m sure.

Thursday, October 20, Kuwait City, Kuwait: This was our head waitress at the Hotel Missoni serving me one of my many breakfast espresso jolts (loved their espresso!) She never said much, but always had a sly sideways smile.

Friday, October 21, Camp Virginia, Kuwait: This is a forward gate security guard outside of Camp Virginia. The wind was gusting and a fine talcum powder like sand was blowing across the flat desert plain. This warrior stood out mainly because of his goggles, which were comically too big for his small framed face, but no doubt effective. This sand literally gets everywhere and is obviously something these soldiers must contend with on a daily basis. The goggles, the scarf, the stern way in which he carried himself all made for an interesting subject – I couldn’t pass this one up:)

Saturday, October 22, Kuwait City, Kuwait: This Arab gentleman became increasingly agitated when he realized I was sketching him, or possibly his wife. We were gathered in the Missoni’s lobby preparing to depart to our next location and I used the down time to capture his annoyance with me – guess I should have been a little more discrete:)

Sunday, October 23, Undisclosed Military Location: As I waited for a morning coffee, this Army Sargent walked up beside me. He was the toughest looking man I’ve ever seen! He was built like a torpedo and had a demeanor to match his hard looks. I said “good morning”, he replied “grumphil-snort!”, or something to that effect – I was NOT going to ask him to repeat it! A good soldier, I’m sure, but it was clearly evident he did not appreciate a civilian at such an early hour. I got my not-so-manly double shot grande café mocha and went to my table where I was soon saved by fellow cartoonists Todd Clark and T. Lewis.  I think the Sgt. ordered molten lava with a side of roofing nails!

Monday, October 24, Doha, Qatar: Exhausted and drained, we all sat in Doha International Airport waiting for our long flight back to the states. None of us seem to be doing much talking, so I began sketching to help pass my time. The gentleman above was wearing a team Russia polo jersey and appeared to be reading the local Arabic paper with ease. He had very expressive features and an electric smile, which he gladly flashed at anyone who looked his way. I had just enough time to capture his essence in my sketchbook before we had to leave for our flight’s gate. Actually thought about this man’s upbeat personality on the flight home – it was a great way to end our trip!

It is a fresh new year – full of hopes, dreams, and challenges. Many of us will use the new year as a launching pad for personal improvement and an opportunity to accomplish important goals. Maybe yours is to advance within your department, to finally run that extra mile, or simply lose a few pounds – whatever it is, it’s a great time reevaluate and implement a new you!

However, change – real change – starts from within! Change your own attitude and outlook on life before expecting others to do the same. Because when you come right down to it, you are the only person you can change – but your actions will influence many others to follow.

Hard to believe it’s been four years since I lost my friend and mentor. It took a few years after his death to put my feelings into an editorial cartoon and I desperately hope this message will help others out there!

Listen and be involved in their lives – be there for them!